As I am in a (un)zipping mood, this week the opposite problem of last week.
The example is not so ready-to-use as in my previous post, as it depends on choices made in your development process of other SSIS packages.
Still I hope you can adjust this example to match your needs.

If you have imported and archived (csv- or xml) files, these files can take up a lot of disk space. The archive folder can also become overwhelmingly full with ten thousands of files, which can make it slowly accessible and difficult to manage.

To tackle this problem I have made a fully configurable SSIS package, that can be executed from a different package with an Execute Package Task.
The package is made using SSIS 2014.

The zipping itself is done with 7za.exe, for more information on how to get and install this free program see my previous blog post.

When I used this concept, a different SSIS package moved files to a subfolder of an archive folder after they were processed, but their name was prefixed with the LoadCycleID with leading zeros, for instance 001345_customers.xml.

Here is a picture of the end result: 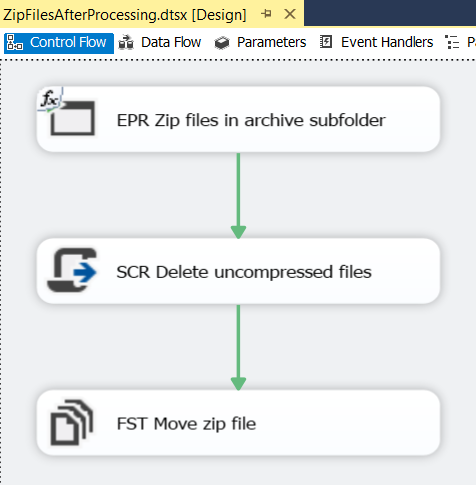 However not all variables might be necessary, I like the concept of being able to configure all values in one place.
The data type of all variables is String, except LoadCycleID which is an Integer.
Every variable uses an expression to set its value.
Here is a detailed list of all variables and the expression used for each one.

Important note: if you expect that the value for LoadCycleID will grow beyond 999999 over time, you should add more prefixed zero’s to LoadCycleIDString and increase the number 6, the second parameter of the RIGHT function.

SSIS variables of the package

The control flow is quite straight forward, only three tasks and we’re done.

This task creates one zipfile containing multiple other files in the ArchiveSubFolder.
From the SSIS Toolbox drag an Execute Process Task to the Control Flow panel and open the Execute Process Task Editor.
On the General and Process panes you do not have to change anything. 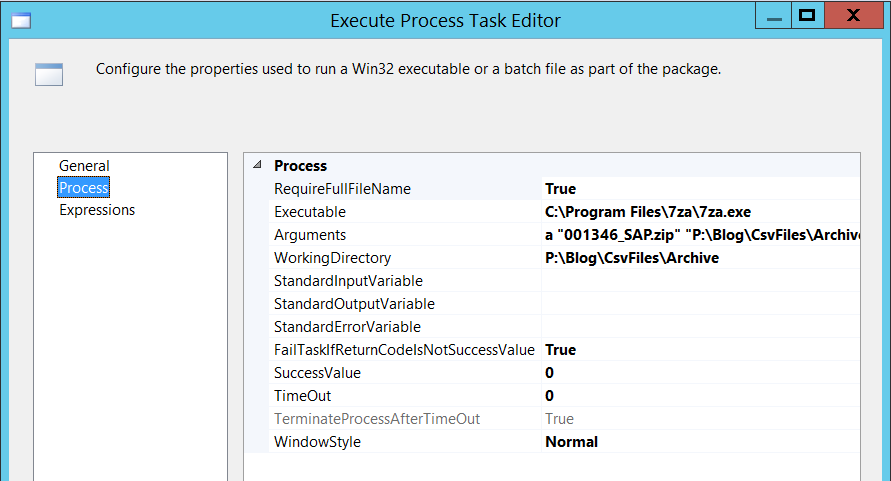 Please note that in the Arguments expression -mx=9 is used. This is the compression level, level 9 means “ultra” compression. This level gives the smallest zip files but is also the slowest compression level. You can for instance also use 5 for “normal” or 3 for “fast” compression, if this is what you want.

Expressions for the Execute Process Task

This task deletes the files that were added to the zip file in the previous task.

Then in the namespaces region add one namespace, as indicated below.

WARNING: Make sure that no files that meet the file name pattern of files to add to the zip file are added to the ArchiveSubFolder while or after the zipfile is (being) created. Otherwise files that are NOT zipped might get deleted!

Time to test the package and tell the result in pictures (if you don’t mind). 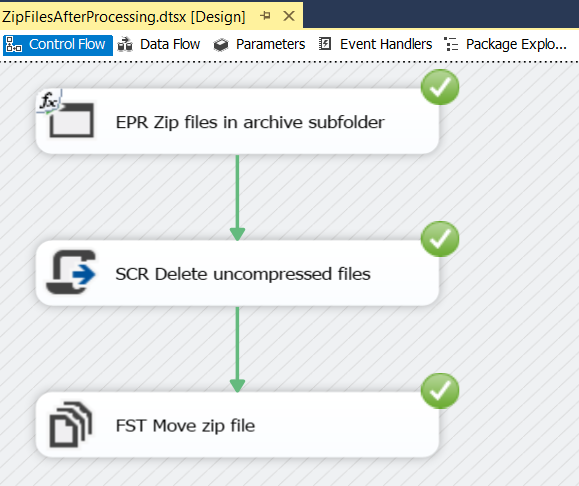 All csv files replaced with one zip file ..

In this blog post you could read the steps needed to build a SSIS package that creates a zip file containing a number of files in an archive(sub)folder.
This makes the archive smaller and easier to manage.
However beware that you only delete files that were added to the zip file. For more details see the warning above.