Big Data & Analytics insight 2016: save the date for an insightful conference
(as a speaker I was asked to do a bit of promotion ..)

A few weeks ago my blog post was about using a C# Script Component to detect duplicates in a Data Flow Task.

This week I want to discuss it’s brother, the C# Script Task, which can be used in the Control Flow.

Again, extremely flexible, basicly you embed a small C# program inside your package, and you can use the entire .NET framework for all kind of things. I used it to fix malformed csv source files, before processing them in a Data Flow Task.

Csv (comma seperated files) have their pros and problems, as compared with other formats, like XML.

A few pros are that they are usually smaller in size than XML files, and easier and faster to load. These are two reasons why csv files still are used a lot these days, despite of the fact that XML files are in some cases more reliable, and more flexible as far as the file contents is concerned.

Unfortunately csv files are not so good in holding memo/comment fields that might contain carriage return/line feeds in it. Memo fields with those characters do not stay on one line in the file, therefore making the csv file more difficult to process (at least the standard flat file source can not handle it in all cases).

Also the structure is very strict. If a column is added to a csv source file, your Data Flow Task will break.

In this post I will discuss a possible solution for both problems:

This post assumes that you have worked with SSIS before, know what For Each Loop Containers and Data Flow Tasks do, and recognize the csv problems above. It is a big advantage if you can read and understand C# code.

My demo is based on the following hypothetical scenario:

Here are a few pictures of the end result:

The connection managers that are needed 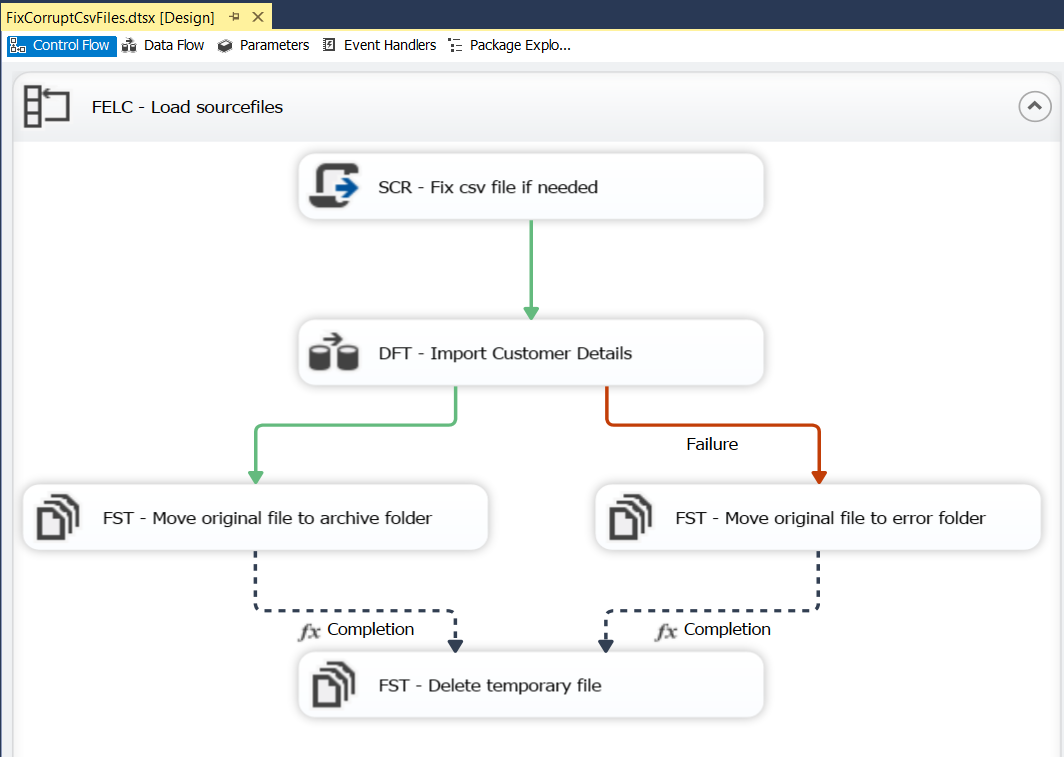 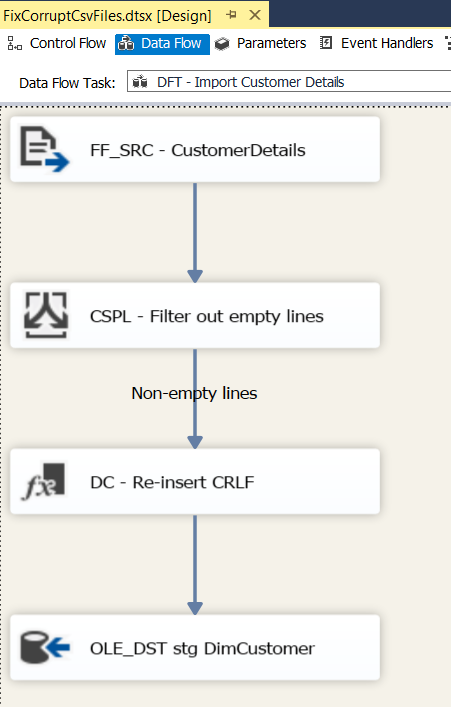 All parameters are Required and their Data type is String.

The parameters of the package

The Data type of all variables is String.

SSIS variables needed to do the job

The Control Flow – For Each Loop Container

Add a For Each Loop Container FELC – Load sourcefiles and configure it as a Foreach File Enumerator. Retrieve file name Fully qualified. 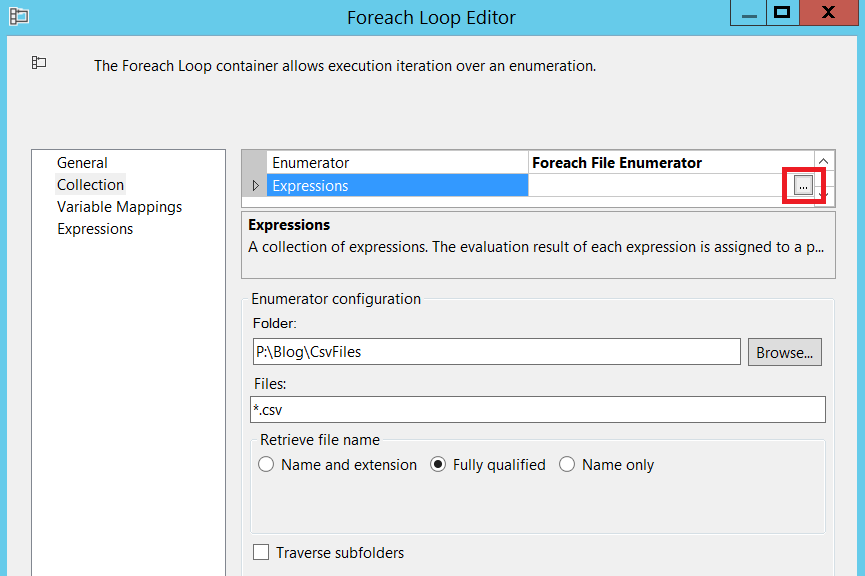 On the Collection pane, just below the Enumerator type, press the ellipsis next to Expressions. In the Property Expressions Editor configure the Property Directory to be set by
Expression @[$Package::SourceFolder]. 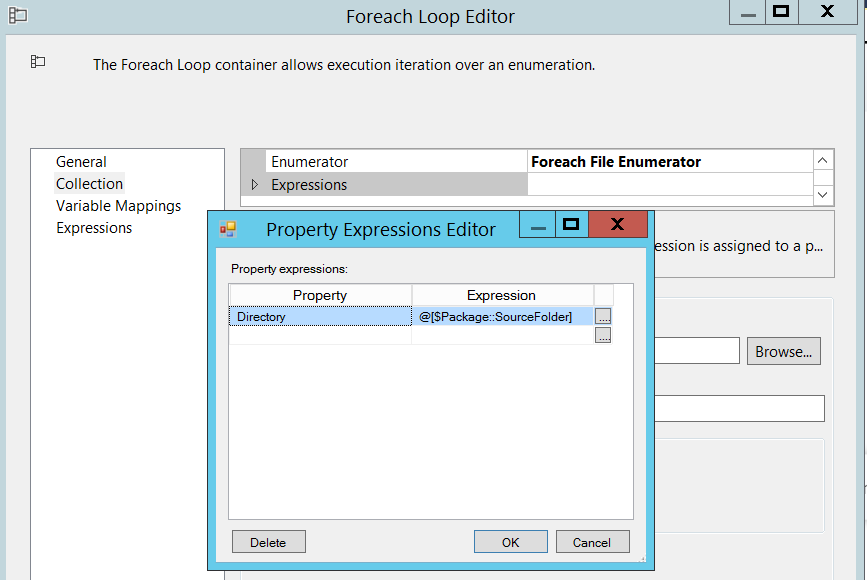 On the Variable Mappings pane, map variable User::SourcePathAndFilename to Index 0

For Each Loop Container configuration

Next, add a Script Task SCR – Fix csv file if needed.
In the Script Task Editor, configure the following: 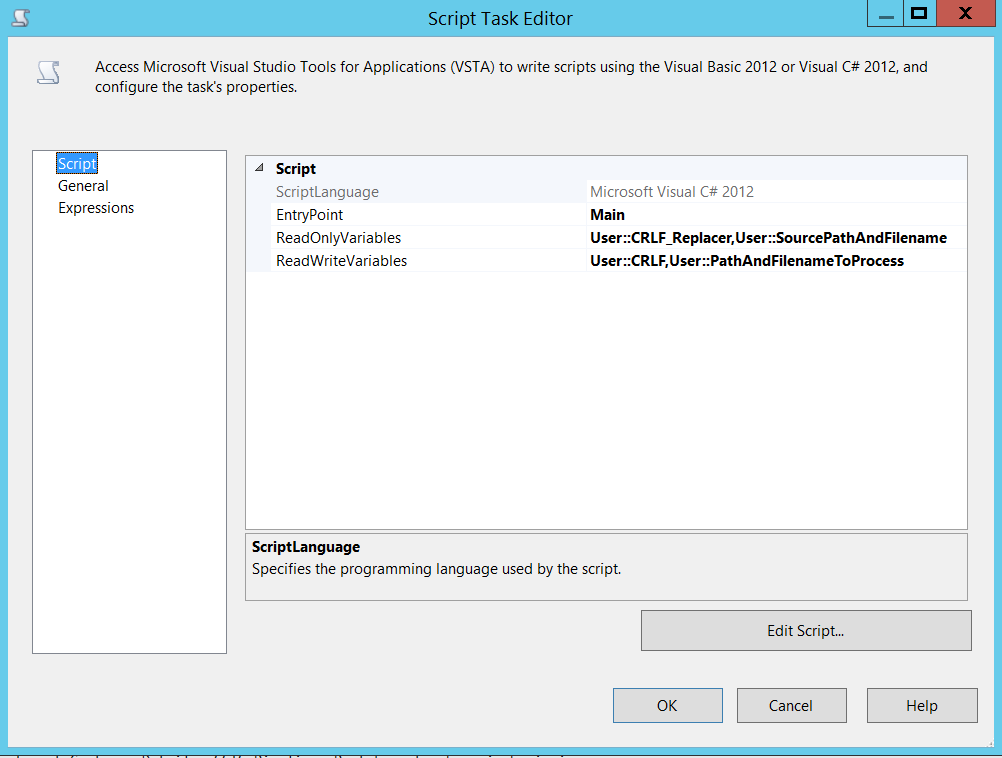 Then press the Edit Script… button.
Don’t get scared by the amount of C# code, if you keep your head cool, it will be fixed in 10 minutes!

Adjust the script as follows: 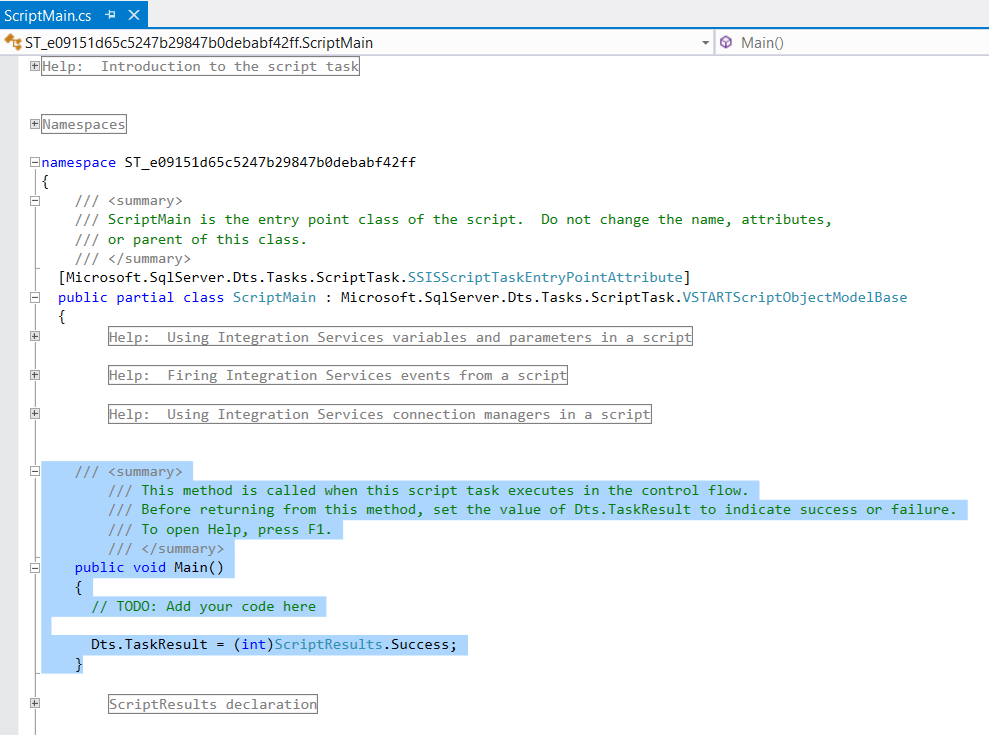 Replace the highlighted part above with the code below

Now remove public void Main() completely and replace it with the code underneath (to avoid malformatting due to html rendering, please download the original csharp script here).
Then check the code for !!! ATTENTION !!! comment. These are points in the script that you might need to change.

This program is free software: you can redistribute it and/or modify
it under the terms of the GNU General Public License as published by
the Free Software Foundation, either version 3 of the License, or
(at your option) any later version.

This program is distributed in the hope that it will be useful,
but WITHOUT ANY WARRANTY; without even the implied warranty of
MERCHANTABILITY or FITNESS FOR A PARTICULAR PURPOSE. See the
GNU General Public License for more details.

You should have received a copy of the GNU General Public License
along with this program. If not, see http://www.gnu.org/licenses/.
*/

/// This method is called when this script task executes in the control flow.
/// Before returning from this method, set the value of Dts.TaskResult to indicate success or failure.
/// To open Help, press F1.
/// </summary>
public void Main()
{
// Copy a few SSIS variables to C# string variables.
string sourcePathAndFilename = Dts.Variables[“User::SourcePathAndFilename”].Value.ToString();
string crlfReplacer = Dts.Variables[“User::CRLF_Replacer”].Value.ToString();

// Call the method that checks if the sourcefile is corrupt and if so, fixes it.
FixFileIfCorrupt(sourcePathAndFilename, crlfReplacer);

// Check if the header of the file is as expected, and return the header row through a ref parameter.
// If the file header is not as expected, do not touch the file and exit this method.
if (!CheckAndReturnHeader(sourcePathAndFilename, ref header, ref headerAppend, ref detailAppend)) return;

// Get the encoding of the current file. We need this if we have to create a corrected file.
var encoding = GetEncoding(sourcePathAndFilename);

// Read all lines of the file into a string array.
// !!! ATTENTION !!! WARNING: only do this when the files to process are relatively small.
// !!! ATTENTION !!! When in doubt, test it and monitor memory usage.
// (I suppose files up to 50~100 MB might not be a big problem but larger might, but testing is the way to find out)
string[] lines = File.ReadAllLines(sourcePathAndFilename, encoding);

// Use a variable to set when the file has changed due to corrections this method makes.
bool fileHasChanged = false;
bool lineIsOkay = true;

// Loop through all lines in the file from back to front!
for (int i = upper; i >= lower; i--)
{
// If there is still some text in the buffer, append it to the line and make the buffer empty again.
if (appendbuffer != string.Empty)
{
lines[i] = lines[i] + appendbuffer;
appendbuffer = string.Empty;
fileHasChanged = true;
}

if ((!lineIsOkay) && (i > lower))
{
// Line is NOT OK.
// I have to append this line to the previous one, except when it is the header.
// To do this put this line into appendbuffer variable.
// I use a replacement string for the removed carriage return/line feed.
// This will be converted back to a carriage return/line feed in the Data Flow.
appendbuffer = string.Format(“{0}{1}”, crlfReplacer, lines[i]);
lines[i] = string.Empty; // Package can handle empty lines.
fileHasChanged = true;
}

// !!! ATTENTION !!! If you do not have old fileformats you can remove this block.
// Code to handle the old file format, without a Comments column.
// The code below reformats the file so that it become always in new fileformat, with an empty comment.
if (headerAppend != string.Empty)
{
// This is an old format without the Comments column. Append Comments column header to header and a delimiter (pipe) to detail rows.
fileHasChanged = true;

if (fileHasChanged)
{
// Here the modified/corrected file is stored to a temporary file, so a “tmp” extension is added to the modified filename.
// For auditing purposes I keep the original file and not the corrected one,
// because the latter can always be recreated when needed.
// Also, when a bug would exist in the creation of the corrected file
// (initially I had a problem with codepages, which should now be solved),
// the original file might get lost forever.
pathAndFilenameToProcess = String.Format(“{0}.tmp”, sourcePathAndFilename);

// Open the file to read the header line, then close the file again.
using (StreamReader reader = new StreamReader(sourcePathAndFilename))
{
header = reader.ReadLine();
reader.Close();
}
// !!! ATTENTION !!! Here you could do a check on (parts) of the header,
// so that you do not change files with an unexpected format.
if (!header.ToLower().StartsWith(“socialsecuritynumber|firstname|lastname|gender|residence”))
{
return false;
}
// !!! ATTENTION !!! Here you could check for old file formats.
// Old formats can only be handled when one or more new columns were added at the end of the csv lines.
// In the example, there is a file format without the Comments column still being delivered.
// By appending the Comments column with an empty value for those files, they can be processed
// by the same Data Flow Task using only one Flat File Source Connection.
if (!header.ToLower().Contains(“|comments”))
{
// This is an old format without the Comments column.
// Append Comments column header to header and a delimiter (pipe) to detail rows.
headerAppend = “|Comments”;
detailAppend = “|”;
}
return true;
}

When you have adjusted the script for your file, choose Rebuild from the BUILD menu in the VstaProjects – Microsoft Visual Studio Window. Then close that Window. You return to the Script Task Editor, close it by pressing OK.

Add a Data Flow Task to the Control Flow and name it DFT – Import Customer Details.
Then add the following components to it:

From the SSIS Toolbox, drag a Flat File Source to the Data Flow area and create a new Flat File connection manager.

If you want to rebuild the demo, download the csv files (and C# script) here.
Configure the Flat File Connection as shown in the picture below: 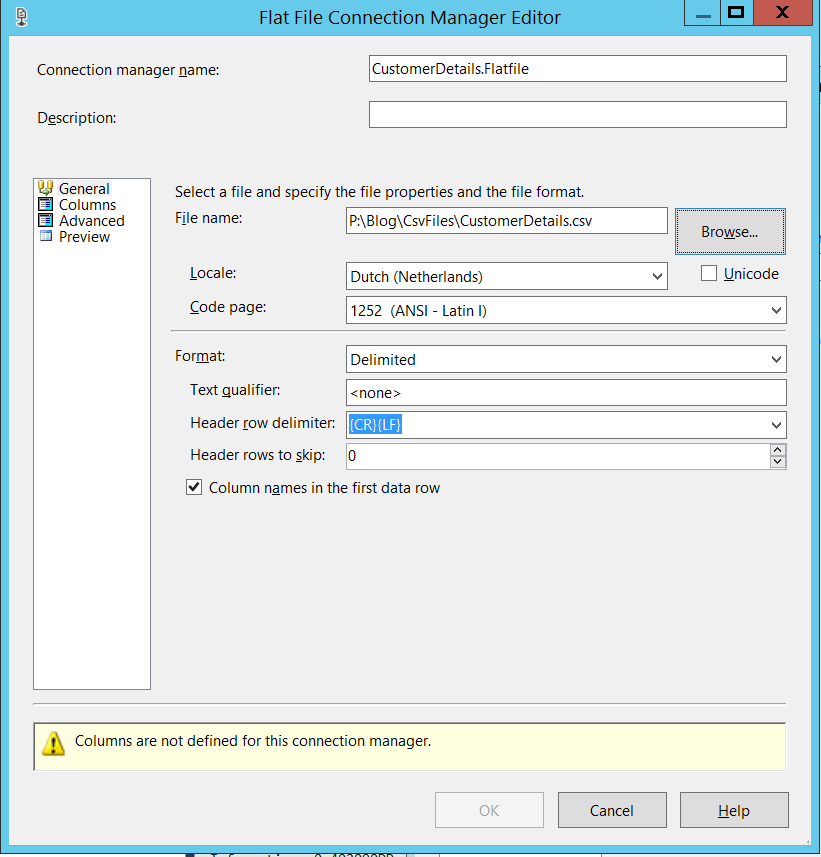 Choose Advanced in the pane on the left and configure the properties for each column as follows: 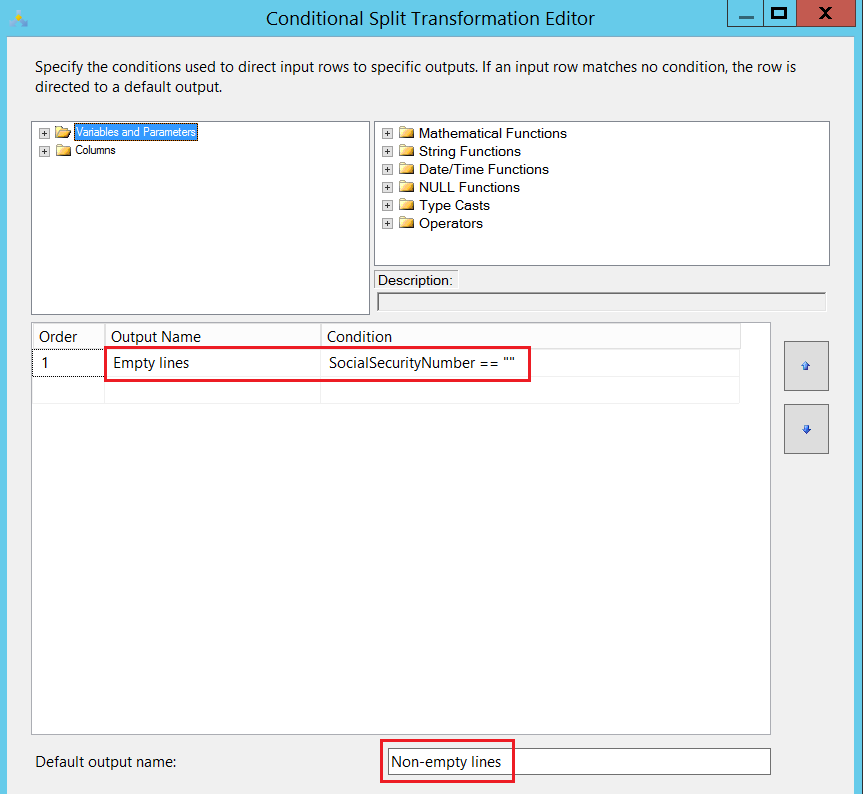 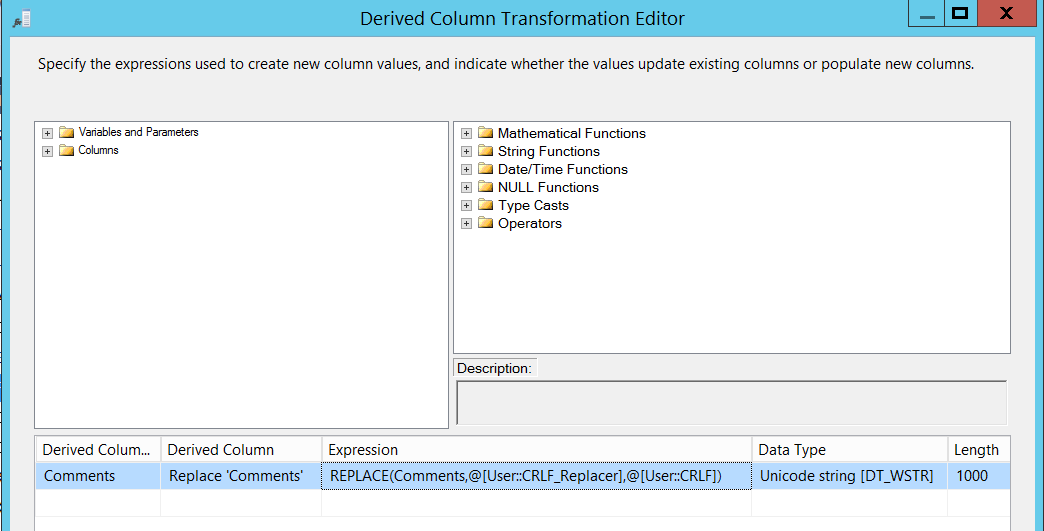 To rebuild the demo, create a table to store the rows from the data flow task,
add a OLEDB Destination that uses this table. 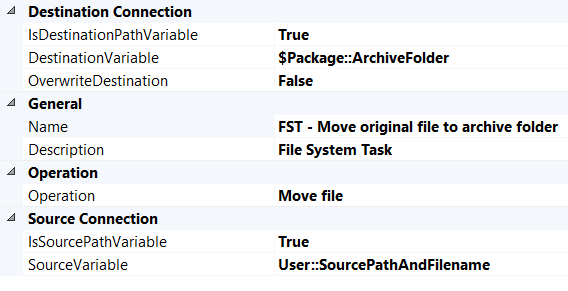 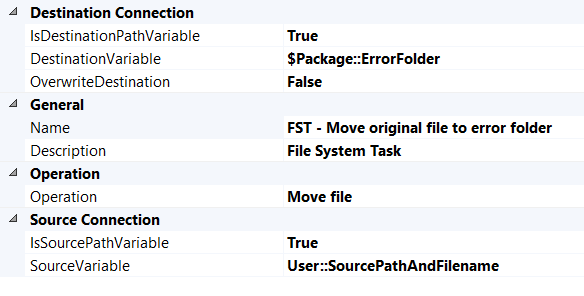 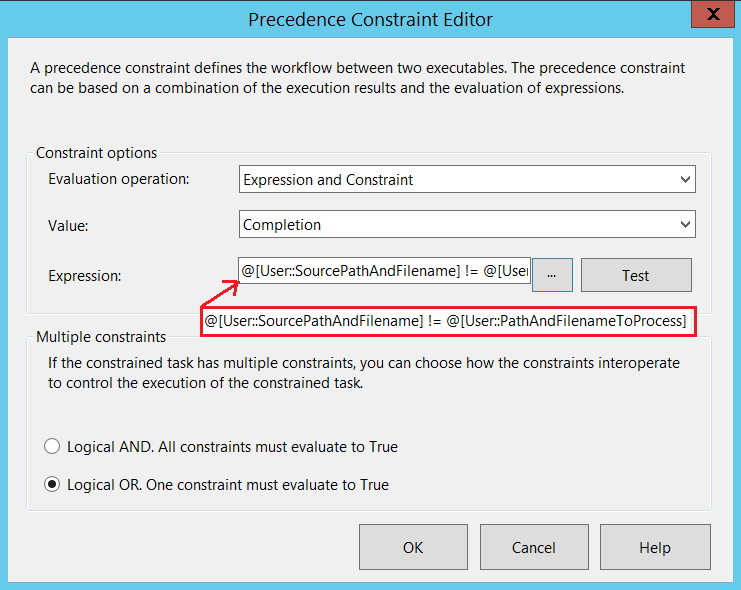 Precedence constraint of “FST – Delete temporary file” (you need to set it twice).

To show you that it works, I run the package in debug mode.
To be able to have a look at the temporary/corrected files, afterwards, I have disabled the File System Task that deletes this file. 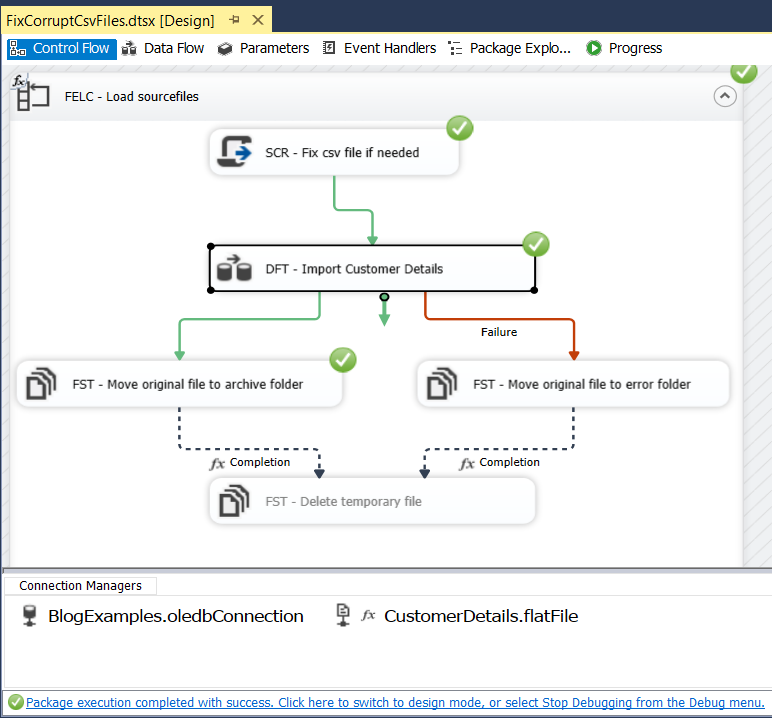 When I open the “CustomerDetails.csv.tmp” file after the package has run, I can see that line 15 was corrected.
From the second screenshot you can see that the CRLF_Replacer value was inserted twice. 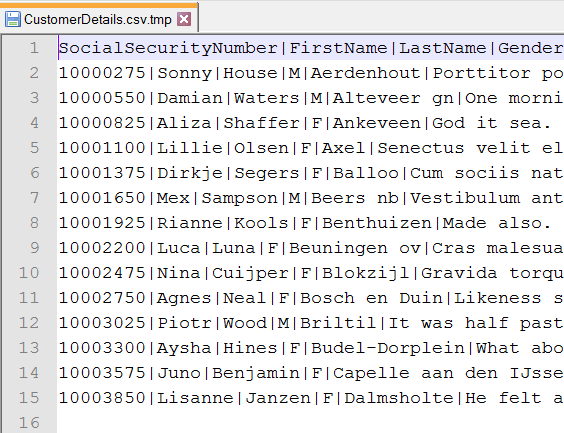 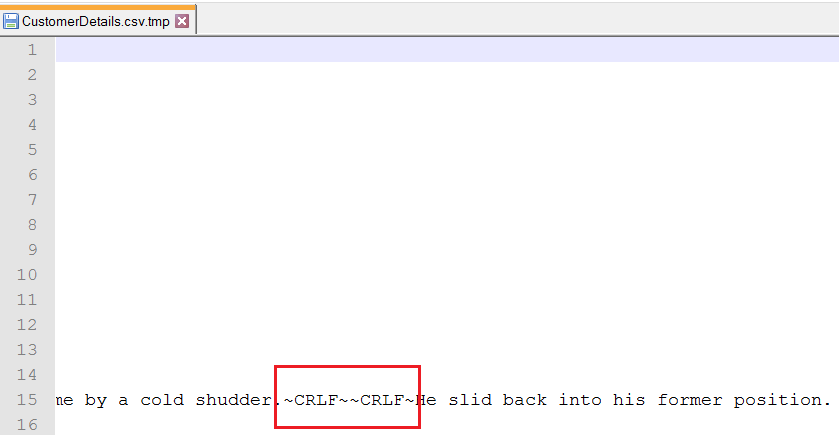 And when I run a query on the destination table, I can see that the Comments column contains the original CarriageReturn/LineFeeds! 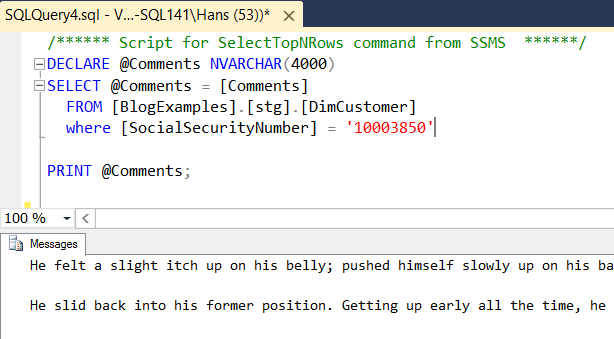 By the way, all the data in the csv files is generated from random firstnames, lastnames and residences and fake social security numbers. Any match with existing persons would be based solely on coincidence.

Csv files still are useful today, because they have some advantages when compared with XML files.
However they also have their limitations, which can be frustrating when loading those files with a Data Flow Task.
In this blog post I have demonstrated how to overcome a few of those limitations, namely:

The solution is based on using a C# Script Task.

Please be aware that I do not pretend this is the best solution.
If you are very familiar with C#, you could all of the processsing in the Script Task, using SqlBulkCopy, and you would not need a temporary file.
However the Data Flow Task offers some advantages, like lookups you can use, without the need to do this in a script.
If you create good Interface Specification Documents on forehand (for instance containing how to handle carriage return/line feeds in column values) you can force that all sources deliver correct csv-files, and then they do not have to be corrected.